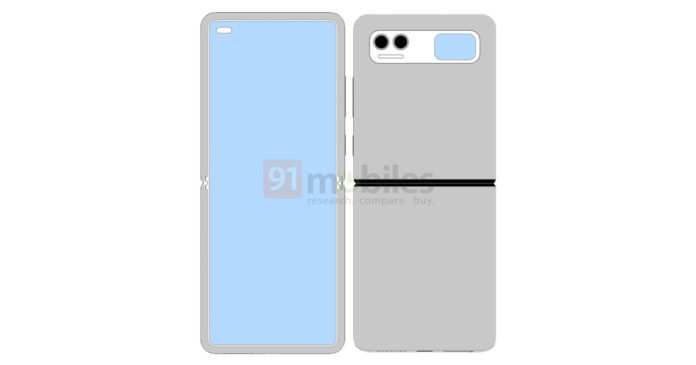 Xiaomi is working on its foldable phone these days. The company in one of the upcoming foldable phones of Xiaomi Samsung Galaxy Z Flip And Moto Razr 5G Like the foldable mechanism can offer. Xiaomi has filed a design patent for this foldable smartphone with WIPO (World Intellectual Property Organization). It appears that this flip phone folds from the middle. However, what makes this phone unique is the module in its back panel which has a square cutout with two large camera sensors and LED flash. This cutout can possibly be a secondary display, in which notifications, time can be seen. xiaomi Telephoto camera lens can be given in this phone.

Along with this, the patent image shows that this flip phone of Xiaomi folds from the middle like a laptop. This phone can come with better multitasking feature. For this, Xiaomi will have to do a lot of work in MIUI. The volume rocker as well as the power button have been given in the right frame of this phone. Along with this, Xiaomi has given speaker grill, UNB Type C port and SIM tray in the bottom. As nowadays 3.5mm audio jack is not being provided in any modern smartphone, audio jack will not be given in this phone also. Read also: Realme X9 and Realme X9 Pro will be launched soon with strong specifications, know what will be the features


Can get dual selfie camera

Talking about the front design, the display of Xiaomi’s upcoming flip phone will have a pill-shaped cutout, in which two selfie cameras can be given. It is possible that the company can also provide an LED flash with a camera sensor. From where this Xiaomi phone is folded, creases can be seen there. In the patent image, this phone of Xiaomi seems to be quite slim, so it can be guessed that the battery can be given in this phone of Xiaomi. Read also: WhatsApp is bringing a great feature, users will be able to send high quality images

The screen has specifications

Earlier, a report by My Smart Price had claimed that a circular camera could be given in Xiaomi’s upcoming Flip smartphone. However, the rest of the design, connectivity ports, front pill shape camera cutout are all the same. At present, only the design pattern of this phone of Xiaomi has been revealed. There is no information about its specifications yet. But it is believed that this phone of Xiaomi can be offered with flagship specifications.

Latest Video: These are the best smartphones under 40k